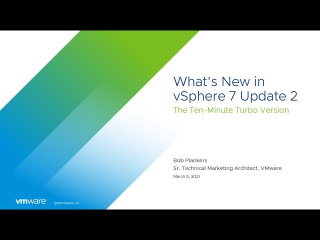 Join us for the 10 minute “turbo” version of What’s New in vSphere 7 Update 2! On March 9, 2021 vSphere 7 Update 2 was announced, bringing new features and functionality to vSphere 7 and vSphere with Tanzu, making it the best vSphere yet. vSphere with Tanzu gets integrated load balancing & confidential containers. There’s new support for the most modern GPUs, and multi-instance GPUs, a better method of sharing that hardware among workloads. vSphere Lifecycle Manager gets new deployment features and CLIs and the ability to suspend VMs in memory while the hypervisor restarts. vMotion gets faster on modern networks, and so do realtime workloads. AMD CPUs get performance improvements, and vSphere gets the ability to enable encryption…Read More