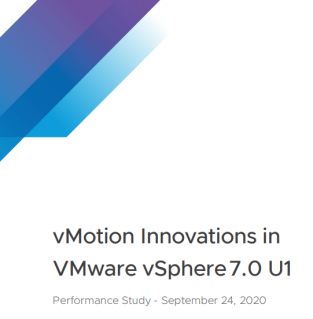 The performance team recently released a whitepaper on the vMotion performance improvements in vSphere 7 (update 1). The improved vMotion logic in vSphere 7 is introduced to greatly reduce the potential performance impact during a vMotion operation, as well as shorting the switch-over time (also referred to as stun-time) when a workload is moved from The post vMotion Performance Study appeared first on VMware vSphere Blog.