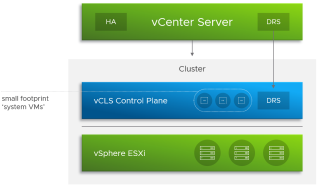 The vSphere Clustering Service (vCLS) is a new capability that is introduced in the vSphere 7 Update 1 release. It’s first release provides the foundation to work towards creating a decoupled and distributed control plane for clustering services in vSphere. The challenge being that cluster services, like the vSphere Distributed Resource Scheduler (DRS), depend on The post vSphere 7 Update 1 – vSphere Clustering Service (vCLS) appeared first on VMware vSphere Blog.